An interesting Tanzania safari starting from Nairobi the capital City of Kenya by shuttle to Arusha and then drive to Lake Manyara for game viewing. Arusha being the starting point for Northern Tanzania safari one can fly into Kilimanjaro airport or take a shuttle from Nairobi to Arusha & start the safari. During this Tanzania Safari from Nairobi City you will first visit Lake Manyara and from there you drive to Serengeti via Ngorongoro Conservation Area and visit Ngorongoro Crater and Tarangire National Park on your way back.

This affordable Tanzania safari from Nairobi City start when our shuttle bus/private shuttle picks you up from your hotel in Nairobi or any entry point and drive in a very good road across Namanga border all the way to Arusha. In Arusha our safari manager will meet you at the shuttle station and transfer to your Lodge. Then safari briefing will follow before leaving you to spend the rest of the day in the lodge just relaxing & get ready for your safari tomorrow. In the morning on agreed time your safari driver guide will meet you & start your Tanzania wildlife safari by driving to Lake Manyara National Park.

Please Note: This package can be customized based on your preferences, ideas & budget, the package can start with pick up from any entry point & can include a night in Arusha etc. 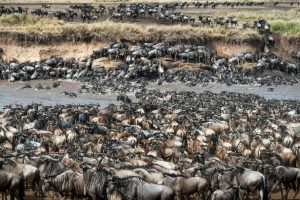 Comfort & private – Transportation will be in a private safari Land Cruise with a photographic roof thatched to ensure great picture at any angle, driven by a profession local English speaking safari driver guide who will spot all animal in your list & drive to the areas that will leave you breathless with wonder & excitement. Accommodation will be nice mid-range lodges & tented camps.

Best prices Tanzania safari from Nairobi City starts after breakfast at your hotel/lodge in Nairobi. At around 7.30 am you will be picked up and drive to Arusha town via Namanga border, after all immigration formalities at the border you will drive toward Arusha and arrive in the afternoon. You will then be transferred to your hotel in Arusha, late our safari manager will come for detailed safari briefing before leaving you to spend a leisurely afternoon while enjoying lodges facilities and get prepared for you safari in Tanzania from Nairobi Kenya.

After breakfast at 8.30 you will depart for Lake Manyara National park for a wonderful game drive, the driving is along Masai steppe & many villages, after registration at the gate, start your first game drive of your safari. This small and beautiful National Park is at the base of the Great Rift Valley escapement therefore endowed with lot of underground water streams that flows to the Lake. You may expect to see giraffe, wildebeest, zebra, buffalo, elephant, hippos, warthog, troupes of baboons, monkeys, flocks of flamingos and other bird species, with a bit of lucky the famous tree climbing lion, leopard, hyenas, jackals, cheetahs can be spotted. Packed lunch will be served in one of the picnic site inside the Park. After lunch & some rest embark on your afternoon game drive & later afternoon drive to Marara Valley Lodge for dinner & overnight.

After breakfast at your lodge leave for Serengeti National Park via Ngorongoro Conservation Area, stop for Crater view point before proceed to Serengeti with en route game drive. On the way you will visit one of Masai village where some Masai warriors will invite you & take you in and around their houses with stories of their nomadic life around this are.

You will meet kids & some family member where you can chart, ask questions & take picture with them, later they will sing a farewell song which involves dancing & jumping high, you can join the dancing. After drive to Naabi Hills gate for check into Serengeti, you may have picnic lunch at the gate or at the Kopjes (Rocky outcropping) before continue to the vast Serengeti plains for game drive in search of the great Wildebeest Migration & big cats.

See huge diversity of animal species and be convinced that Serengeti deserved to be one of the World Heritage site. You can expect to see lions, leopard, cheetahs, buffalo, many antelopes and some bird species, arrive in the lodge later afternoon.

Your Tanzania safaris of 7 days from Nairobi city continues as you depart your camp for an early morning game drives in the vast Serengeti plains with packed breakfast box and lunch box. Morning game drive allows you to spot some cat family on the road as they try to avoid the morning mist. You may also see other nocturnal predator coming back from their long night of hunting or a group of lioness gathering to organize an ambush, break for breakfast somewhere in the bush.

As you have noticed where the Wildebeest Migration is packed other day, after bush breakfast will drive straight to where they are & spend much time with the migration of herds possible you may witness some animal actions like fighting, hunting even killing. Serengeti is not only the scene for Wildebeest Migration which occurs annually in Serengeti Masai Mara Ecosystem but it is also an amazing place where you can sport a huge diversity of animals & birds like lion, leopard, jackals, hyenas and cheetah, zebra, elephant, topi, giraffe, buffalo & many antelopes.

Birds are abundant from eagles, vultures, ostrich, herons, secretary bird, ducks, geese and others. You may have your packed lunch here & some rest before embarking with your sunset game drive. Return back to the lodge during or before the sunset for dinner & overnight.

After breakfast depart for Ngorongoro crater with en route game drive & descend over 600 meters high walls into the crater floor for an amazing game drive. Ngorocoro Crater was formed some 3 millions years ago due to some internal forces. After eruption the middle sank down to form a larger caldera which today mistakenly called a Crater.

Supported by early around fodder & adequate water supply from the highlands the Crater is home to thousands of wildlife which include herds of wildebeest, zebra, buffalo, eland, hippos, warthog, African elephant & the rare black rhinos.

Another big draw card in this Great Caldera is the denser population of predators which include lion, cheetahs, hyenas, jackals & the ever-illusion leopard which require sharp eyes to spot.  You will also visit Lake magadi  a shallow alkaline Lake located on the Southwest corner of the Crater frequently visited by hippos & some flocks of flamingos. Packed lunch will be served at a picnic site which is close to elephant pool, after lunch & little rest embark on your afternoon game drive. Late afternoon drive out & to Edoro Lodge for dinner & overnight.

After breakfast depart for Tarangire National park and go on game drive after settled park formalities and permits. Herds of elephants and the scattered huge baobab trees are common in this Park, spot wildebeest, zebra, giraffe, buffalo, lion, leopard, cheetah and many many bird species. Break for lunch in one of the picnic site after, proceed with game viewing before going to the lodge for dinner and overnight.

After early breakfast return to the Park for game drive or go for a guided nature walk at the park boundary before leaving for Arusha arriving in the afternoon. There is some regular public Shuttles that leaves Arusha for Nairobi at 14:00 hours.

Tanzania safari starting from the city of Nairobi Kenya are becoming popular among visitors of this Great East African city of Nairobi, a shuttle or a flight form Nairobi can bring you to the Tourism capital of Arusha & start the safari. Karibu Sana!

All Accommodations subject to availability

Prices inclusive & exclusive will depend on your inquiry. Thank you & Karibu Sana!

If you will be traveling with kids please give us their age. Thank you

To be updated when we have more information from you!

Services of a professional safari guide

All game drives as mentioned

01 x HB Overnight at Planet Lodge or similar in Arusha

Meals as mentioned in the itinerary

The Package does not include.

All items of a personal nature

Visa fee (50 US$/US$100 for American & Irish Citizen to enter Tanzania) – to be paid upon arrival) Can be arranged online: https://eservices.immigration.go.tz/visa/

Alcoholic and non-alcoholic drinks and beverages in lodges on safari