Tanzania Destinations, think of the African experience and a kaleidoscope of images springs to mind, herds of zebra, wildebeest and gazelle stretching to the horizon under pearly down skies, a lion stalking through dry grass, a warrior striding into the sunset, white beaches backed by coconut palms swaying in the breeze off a warm sea, a snow capped mountain rising out of the red dust of the plains. All these images reflect the beauty of not simply a great continent but just one country Tanzania.

Basking south of the equator over an area half size of Western Europe, Tanzania is the land of boundless fascinating and diversity. From the vast lakes of the interior to the blue waters of Indian ocean and from the Northern mountains to the southern Ruvuma river the country is the Mosaic of tropical forest, savannah grassland and shimmering lakes containing some of the largest and most beautiful wilderness areas in the world.

But Tanzania is much more than the set of stereotype Hollywood images. It is a modern progressive state with a rich cultural and historical heritage that began almost four million years ago when our primitive ancestors first left the forest and walked upright on to the plains.

Formed by massive earth upheavals of ages past, when the rift valley split east Africa from Mozambique to Ethiopia, the area was already home to an ape-like creature that stood on two legs. This ancient traveler left their left his footprints in Laetoli northern Tanzania to be discovered in 1979 by Mary Leakey, of the famous husband and wife archaeological team. The fossils proved to be the oldest “hominid” tracks so far unearthed.

During excavations twenty years earlier more evidence was discovered to support the views that Tanzania is the cradle of mankind. At nearby Olduvai Gorge fossil remains of Homo habilis, “Handy Man” was dated by Dr. Louis Leakey as 1.75 million years old. He believed that Habilis had the physical attributes and intelligence to make tools and as such was possible direct ancestor of modern man.

This early relative eventually migrated to the whole of East Africa and its descendants centuries later moved to Asia, India, Europe and other parts of the continents as traders, warriors, farmers, craftsmen and explorers. Throughout the ages the intermingled melding the people, their history, language, customs and culture into contemporary Tanzania.
Today Tanzania is united in independence, people are proud of their past with a vision of the bright future and a land still waiting to be discovered by those who dream of seeing the legendary animals of the Serengeti or the famous snow of Kilimanjaro. 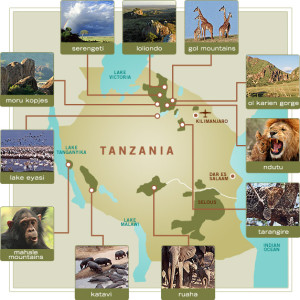 Arusha is located on the Northern part of Tanzania and nestling at the base of Mt Meru on the south. Arusha is the most famous Tanzania’s Tourism capital and the gateway for the great safaris on the northern circuit. Read more..

Thinking of Zanzibar Island and pictures of the very romantic past, white sails dhows in Indian ocean, swinging palms along the beautiful white sand beaches as the sun setting, ruin of the most historical buildings, women in black veils, the exotic spice plantations and the fascinating history of this Island, today, all these are reflecting in people’s culture and traditions.

Serengeti National Park is the World’s number one wildlife sanctuary and the UNESCO’s world heritage site, The Park is in Tanzania and it is where the World known Great Wildebeest Migration takes place.Read more..

The Fifth largest National Park in Tanzania along the Great Northern Highway with a larger population of Elephants and huge baobab trees. Read more..

Lake Manyara National Park is at the base of the Great Rift Valley escarpment with plenty of underground water streams that makes it ever green. Ernest Hemingway once said to be the  loveliest place in Africa that he had never see! Read more..

Ngorongoro Conservation Area Authority is an integration of  three major areas of Ngorongoro, The  Highlands of Ngorongoro with   its two Craters of  Embakai and Olmoti, the low lands that bordering southern Serengeti and the Ngorongoro Crater. The area is not a National Park  but a Conservation area since the local Masai tribe lives there harmoniously with wildlife (A Multiple Land Use) Read more..

Ngorongor Crater has the rich wildlife and a larger natural diversity, it is regarded  by many as the 8th wonder   of the world. Read More..

-The Highlands of Ngorongoro Crater

Ngorongoro Crater Highlands is a region along the East African Rift in Tanzania, located in a spreading zone at the intersection of branches of the African and Somali tectonic plates, resulting in distinctive and prominent landforms.Read more..

Empakai Crater is the green paradise found at Ngorongoro conservation Area Authority. From Empakai Crater rim you have a fantastic view in the craters’ green paradise. The crater has a width of about 6 km and almost half of its floor is covered by a lake. The depth of the lake is about 85m and its water is alkaline, unusually deep for soda lakes in East Africa. Read more..

Arusha National Park is the closest Park to the northern Tanzania’s safari capital Arusha. Some parts of the Park scenario appears in the Hollywood World famous Movie ‘Hatari’ by Hardly Kruger a German Actor. The Park is beautifully and lovely and it is only 25 km from Arusha town and 35 km from Kilimanjaro International Airport. Read more..

Lake Natron is a soda lake located in Northern Tanzania at the lowest point of the Great Rift Valley in the Eastern branch. The lake lies at the altitude of 600m above the sea level and bordering Kenya in the East. The lake is feed by mineral- rich hot springs but foremost by the Southern Ewaso  Ng’iro River. Read more..

The highest point in the Africans Continent at 5895 meters above the sea level, popularly known as the Roof of Africa. Mt. Kilimanjaro is in Tanzania and it is among the free standing Mountain in the World. Read more..

Mount Meru is the first sight you can see when reaching Arusha town. The mountain is with its 4,566 m Tanzania’s second highest peak after Kilimanjaro. Read more..

One and the only active Volcanic Mountain in East Africa. Ol Doinyo Lengai “The Mountain of God” by Maasai people is on the south of Lake Natron with a height of 10,459 ft. (3,188 m)

A bird watcher’s paradise and a great place for those who seek to see  larger elephant population.
Ruaha is still unspoiled and not known to many, the park offers a stunning game viewing and Nature walks. Read more..

A great opportunity to see the “Big Five”. The third largest park in Tanzania and is traversed through its middle by the Tanzam Highway that runs between Morogoro and Iringa. Read More..

A paradise for bird watchers, flower lovers and the primate seeking visitors.
Udzungwa Mountains National Park is perhaps Tanzania’s most important sanctuary of terrestrial biodiversity. Udzungwe has many other Read More

Selous Game reserve was named after an Englishman Sir Frederick selou an early conservationist and a game hunter died at Beho Beho around this territory in 1917, His death occurred while fighting with Germans during the First World War. Read more..

The isolated park for tourists seeking the true wilderness. The Katavi National Park offers the few visitors who make it there a taste of true wilderness with large wildlife.

Mahale Mountains National Park in Tanzania is among the Africa’s most beautiful park, rich in wildlife including the Chimpanzee that can be seen during the walking safaris at this park. The park is in the remote area and offers a unique attraction to visitors.

This park is endowed with many sources of water hence the Great Ruaha River being dependent to, Kitulo National park is prominent for its floral significance – Hence called ‘The Garden of God’ but for Botanist is a Serengeti of flowers.

It’s a great place to see chimps up close and personal as many of the family groups are habituated to humans. With the possible exception of Mahale Mountains Read More

Visit the only island on Lake Victoria! The 240 sq km island, also known as The Jewel of Victoria, boasts a unique diversity of flora and fau