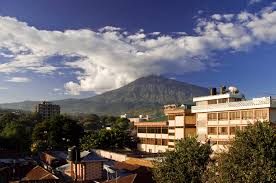 Arusha City is the doorway to the world famous natural reserves of  the Northern Tanzania like Arusha National Park, Tarangire, LakeManyara, Ngororongo and Serengeti. Arusha is among the eldest town in Tanzania established in 1900 years ago under a minor German Military barrack for colonial administration. Since that time when it was a trading place for the domestic tribes of Waarusha and Wameru the city has gradually developed and today is the Tanzania’s Safari and Tourism center. Tanzania Safari Holidays

A short city tour can take you from the charming street markets, souvenir shops, museums, carving workshops of Makonde people, restaurants, bars and street cafes. Due to its popularity the City has been diversified with different tribe from many parts of Tanzania and its population is increasing rapidly, about 350000 people are living in this city and the whole Region is expected to have a population of about 1,664,780 by the end of 2010.

Arusha city, popularly known as Geneva of Africa is situated at the heart of Africa between Cape Town in South Africa and Cairo in Egypt along the Great Northern Highway. At the altitude of 1,545 meters above the sea level Arusha city enjoying a unique climate year around with a moderate temperatures ranging between 13 and 30°C though the average temperature is 25°C. Arusha has three major industries, Agriculture, Mining and Tourism. Coffee, Vegetables and Flowers are defining the agricultural sector in Arusha.

The mining sector in Arusha is led by the precious gemstones known as Tanzanite as it is only found in in Tanzania Arusha in particular. Other areas of interest in Arusha are the East African Community, the African Court on Human and People’s Rights, the International Criminal Tribunal for Rwanda Genocide and others.

The  good climate  of Arusha allows the Arusha National Park to be visited throughout the year.